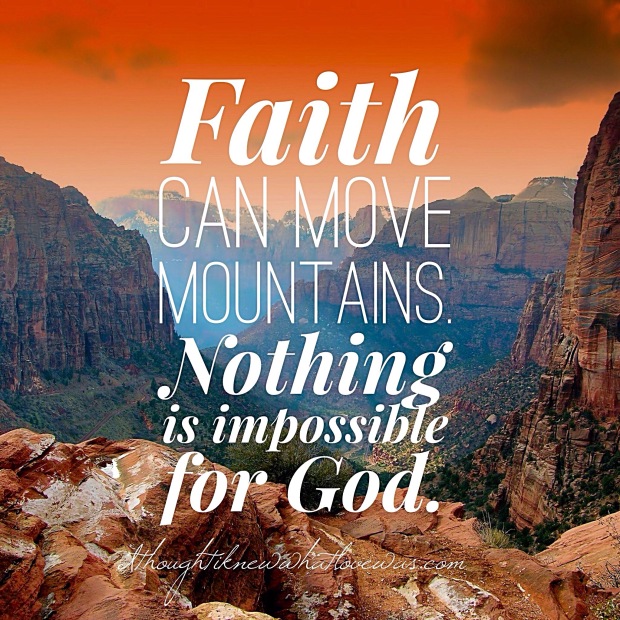 The Bible says we overcome the evil one by the blood of the Lamb and the word of our testimony. There’s a fuel that’s poured on our faith when we hear the stories of others overcoming!

The Bible is filled with stories of God’s awesome power; creating the world and every living creature from His imagination, speaking through a burning bush, providing manna from heaven and quail for His people, sending His Son through a virgin, raising the dead, cleansing lepers, multiplying fish and loaves, multiplying oil, leading by a pillar of fire, parting the Red Sea, defeating armies and giants, delivering His people from the grips of slavery and death…from Genesis to Revelation there’s story after story of miracles.

All you need is to pick up the Word of God. God is not limited. If He doesn’t do something, it’s not because He can’t.

I wanted to post more stories of miracles because I believe in God’s power to move mountains. I also believe if people saw and heard of more miracles today, it would fuel theif faith. God hasn’t ceased being powerful!

If you ever spend time with me, you’d probably be surprised. I laugh quite a bit. I have a child like giggle. I love to play, especially with my heavenly Papa. I’m such a child with Him. I’m part 5 year old, part 100 year old. I am a young adult who feels I’ve been with God for eternity. Why do I tell you this?  Because when you read these stories I want you to understand that I am not super impressive. God is!

I listed last post some of the physical healings I’ve encountered and seen. What about other miracles…today I share some of those.

I had a double major in college. I studied chemical engineering for three years, then switched to civil/environmental. Even with scholarships I came out of college with debt. I told the Lord I wanted to be debt free to help more people. The mountain in front of me was quite large.

Here’s what God did. He provided a job that allowed overtime and a boss who liked to give bonuses. I worked 3 jobs my last year, had a full course load, and still managed to graduate with a B average. That’s a miracle. He sent someone to pay a third of my student loan debt. The list goes on and on…that massive mountain is now a hill. Because nothing is impossible for God. He has unlimited resources. Money is not an issue for God.

There’s someone I know who’s a business owner and had tons of taxes to pay and the business was sinking and she was praying for help or someone to buy her out. She texted me. I prayed a prayer of breakthrough. God’s able. An hour later a client called and gave her enough for the taxes plus extra. The same week more people called to use her business. She’s rebounding.

I’ve never been married. I can only speak of the people I know and have prayed for. Names not used to protect privacy.

One couple was in despair due to his addiction and their inability to have children. It was a very bad situation. We prayed…and prayed…the husband eventually gave himself fully to God and gave up his pornography addiction. He was healed and delivered. A year or so later, they had their first child. We call her the miracle baby! 😊

Another couple was headed for divorce due to his verbal abuse and mistreatment of his wife. The entire marriage was filled with abuse and control. We prayed…prayed…prayed…I gave the wife a book on love written by a well known Christian author. She gave it to her husband to read. He broke down in tears and confessed his sins to God and his wife. Their marriage has been completely restored. God turned a heart of stone into a soft one. Yeah God!

I want everyone to go to heaven…don’t you? I spent a long time praying for my family. I spent many years being rejected by certain people because I talked about Jesus too much, I was preachy….this past year in a period of a few months ALL my siblings came to know Jesus. Even the one who was super opposed to Jesus. He found himself facedown on New Year’s Eve praying in the Spirit. A radical conversion.

We sow the seeds, we trust God to bring the plow. No word from Him fails or returns void.

I told you I’ve cheated death about 7 times. Yet one of the greatest stories is God protecting me from coworkers. My first job in my field out of college I was met with persecution. My program manager hated me. A girl on my team tried to turn everyone against me. They’d sabatoge trials, lie, gossip, bully, try to get me fired, talk down to me….it was a hostile work environment. I went to HR….they were not super helpful. My bosses at the time were the opposite of helpful. I wanted to quit many times. So, my family and I went to God in prayer. Fasting and praying. After 4 years of being bullied, God moved me from under her and those teams. I lost many programs…it was hard. I’d go in the bathroom and cry. I am not a big crier (unless it’s with God). Yet the hell I was walking through was unbearable some days. Yet through grace, God never allowed me to retaliate. After I left those program that woman walked up to me and said, “I know the Spirit of God is in you.” She gave her life to Jesus. I lost years, yet God allowed me to be promoted twice since then and now I oversee the largest test team in our unit. It was my Saul and David, Joseph experience. Yet through it all God protected and promoted.

What’s your mountain? God is so much bigger! What are you afraid of? God is so much stronger. He’s really good. Just like He gave Job double for his trouble, King David a kingdom, Jospeh prominance, Jesus a seat at His right hand….you can trust that linking your life to God will be good. It may not be until heaven until you see the good that’s accomplished. Or it may be this side of heaven. Hang on. I know it’s hard. Been there. Walked through some steep valleys I never thought I’d make it through. I have cried myself to sleep at night. I know sweet friends….but God! He’s 100% faithful!

Father I ask for every person reading this to cast their burdens on You. I ask for miracles in their lives. I decree and declare breakthrough in every area held up or bound up by the evil one. I release peace, joy, love, and hope! Fan the flame of their faith. In Jesus powerful name. Amen.