The thief comes only to steal and kill and destroy; I have come that they may have life, and have it to the full,~Jesus. John 10:10

Be alert and of sober mind. Your enemy the devil prowls around like a roaring lion looking for someone to devour. 1 Peter 5:8

In every story there is a hero and a villain. Our hero is Jesus Christ who took on all the sins of the world. He came to free us. He came to give us life abundantly. He came so that we could have life eternal. Sometimes in life people forget about who the villain in the story is. I dare not give him any glory as he is a defeated foe, but he is still very real. His first name was Lucifer.

Lucifer was an archangel. He was beautiful. He was quite an amazing creation. However, his heart grew proud and he decided he wanted to worshiped instead of worshiping God who created him. See verses below.

“How you are fallen from heaven,
O Lucifer, son of the morning!
How you are cut down to the ground,
You who weakened the nations!
For you have said in your heart:
‘I will ascend into heaven,
I will exalt my throne above the stars of God;
I will also sit on the mount of the congregation
On the farthest sides of the north; I will ascend above the heights of the clouds,
I will be like the Most High.’ Isaiah 14:12-14.

He was thrown out of heaven and all the angels who rebelled with him. They were sent to earth. We can see his first desire was to be worshiped above God. He comes to steal worship from God. He longs for people to worship anything other than God. He hates God.

What are his main objectives?-To steal, to kill, and destroy. He is filled with hatred for all people. He cannot love, there is no love in him. He has the exact opposite nature of God. God is love. The devil is filled with hate. God forgives, heals, restores, brings truth, and brings life. The devil longs to bring death, doubt, division, deception, fighting, quarreling, strife, and death. He is not equal to God in any way. He is not all powerful, all knowing, omnipresent, and he cannot read people’s minds. Enormously big God; itty, bitty devil.

He comes to steal the word of God from people.

Some people are like seed along the path, where the word is sown. As soon as they hear it, Satan comes and takes away the word that was sown in them. Mark 4:15.

He comes to steal joy and afflict with pain, sickness, disease, and death. See the story of Job (Job 1).

He comes to tempt people to sin. For the wages of sin is death, but the gift of God is eternal life in Christ Jesus our Lord,~Romans 6:23.

See the story of Adam and Eve.

Now the serpent was more crafty than any of the wild animals the Lord God had made. He said to the woman, “Did God really say, ‘You must not eat from any tree in the garden’?” Genesis 3:1

He even tempted Jesus.
Then Jesus was led up by the Spirit into the wilderness to be tempted by the devil. And when He had fasted forty days and forty nights, afterward He was hungry. Now when the tempter came to Him, he said, “If You are the Son of God, command that these stones become bread.”

But He answered and said, “It is written, ‘Man shall not live by bread alone, but by every word that proceeds from the mouth of God.’”

Then the devil took Him up into the holy city, set Him on the pinnacle of the temple, and said to Him, “If You are the Son of God, throw Yourself down. For it is written:

‘He shall give His angels charge over you,’ and, ‘In their hands they shall bear you up, Lest you dash your foot against a stone.’”

He comes to lie and murder.

You belong to your father, the devil, and you want to carry out your father’s desire. He was a murderer from the beginning, not holding to the truth, for there is no truth in him. When he lies, he speaks his native language, for he is a liar and the father of lies, John 8:44.
He comes to convince us that people are our enemies instead of him.
For our struggle is not against flesh and blood, but against the rulers, against the authorities, against the powers of this dark world and against the spiritual forces of evil in the heavenly realms, Ephesians 6:12.
He comes to bring your sins up against you leading to guilt, shame, and condemnation. He is the accuser of the brethren.
And I heard a loud voice in heaven, saying, “Now the salvation and the power and the kingdom of our God and the authority of his Christ have come, for the accuser of our brothers has been thrown down, who accuses them day and night before our God, ~Revelation 12:10.
Essentially our real enemy is mostly unseen. He attacks us through people. He seduces us through media and by the use of people. He whispers lies to cause us to doubt God’s goodness, love, provision, and he comes to steal from us. He’s crafty, often subtle or other times bold. He does not love anyone or anything. He is a cruel, controlling, task master. He loves it when people blame God for things he’s doing. He loves to see people sick, hurt, dying, fighting, or being destroyed. The good news is, Jesus defeated him on the cross. Without the cross there would have been no hope for mankind to escape death. Jesus died and was resurrected bringing life, hope, healing, and restoration to all who believe in Him.
Satan (the devil) is not equal to God, and he is doomed to hell for eternity. He is beneath God’s foot. He cannot do anything he wants. He has limited power and will never be more powerful than God. He must bow to the name of Jesus which is above all names. There’s no need to fear he devil. The devil gains access to our lives through sin. Jesus paid for all sins. Scripture says, Submit yourselves, then, to God. Resist the devil, and he will flee from you, ~James 4:7.
So live loved friends. God is not your enemy. People are not your real enemy. May we know who our real enemy is and keep our eyes fixed on Jesus. Jesus is our hero and He already triumphed over the enemy. And having disarmed the powers and authorities, he made a public spectacle of them, triumphing over them by the cross, ~Colossians 2:15. 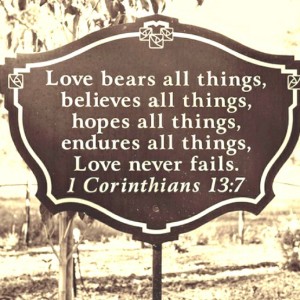 God=Love. You are deeply loved.