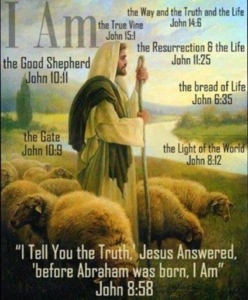 The past few posts have been about what can cause us to run from Jesus. Today I wanted to write about Jesus!

Some love Him, some hate Him. Some believe in Him, some do not. Some love His name, some are offended by His name. He’s been represented and misrepresented since He came into the world. He is the beautiful, radiant, glorious, Son of God. Let’s read what the Old Testament had to say about Jesus in Isaiah 53…

Who has believed our message and to whom has the arm of the Lord been revealed?

He grew up before him like a tender shoot, and like a root out of dry ground.
He had no beauty or majesty to attract us to him, nothing in his appearance that we should desire him.

He was rejected by mankind, a man of suffering, and familiar with pain. Like one from whom people hide their faces he was despised, and we held him in low esteem.

Surely he took up our pain and bore our suffering, yet we considered him punished by God, stricken by him, and afflicted. But he was pierced for our transgressions, he was crushed for our iniquities; the punishment that brought us peace was on him, and by his wounds we are healed.

We all, like sheep, have gone astray,
each of us has turned to our own way;
and the Lord has laid on him the iniquity of us all.

By oppression and judgment he was taken away. Yet who of his generation protested? For he was cut off from the land of the living; for the transgression of my people he was punished.

He was assigned a grave with the wicked, and with the rich in his death, though he had done no violence, nor was any deceit in his mouth.

Yet it was the Lord’s will to crush him and cause him to suffer, and though the Lord makes his life an offering for sin, he will see his offspring and prolong his days, and the will of the Lord will prosper in his hand.

After he has suffered, he will see the light of life and be satisfied; by his knowledge my righteous servant will justify many,
and he will bear their iniquities.

Therefore I will give him a portion among the great, and he will divide the spoils with the strong, because he poured out his life unto death, and was numbered with the transgressors.

For he bore the sin of many, and made intercession for the transgressors.

Why did Jesus come? Why did Love leave paradise to enter into humanity?

He came to save you and me. He offered His life as a perfect sacrifice so every person who chooses to believe in Him and follow Him would have everlasting life. He came to bear our burdens. He came to pay for our sins. He came so we would not be alone or defeated in this sinful world. He came to give hope! He came to set captives free, heal the broken hearted, restore sight to the blind, cleanse humanity, and provide an inheritance we could call our own. He came to give us back the authority Adam surrendered to the devil.

Though He’s often painted or depicted on a cross, Jesus didn’t remain on the cross! He got up with all power in His hands. He was raised up above all powers, seated at the right hand of the Father, and raises us up to sit in heavenly places with Him.

Sweet friends, no matter what life throws at you, Jesus is still victorious. You have an Advocate, a Friend, a Savior, a sure Hope, a Victorious Warrior, a Healer, and Deliverer. He’s not dead! Jesus is very much alive. He loves you. Whatever your need today, cry out to Jesus!

Praying for you and your loved ones. You are deeply loved (John 3:16)!