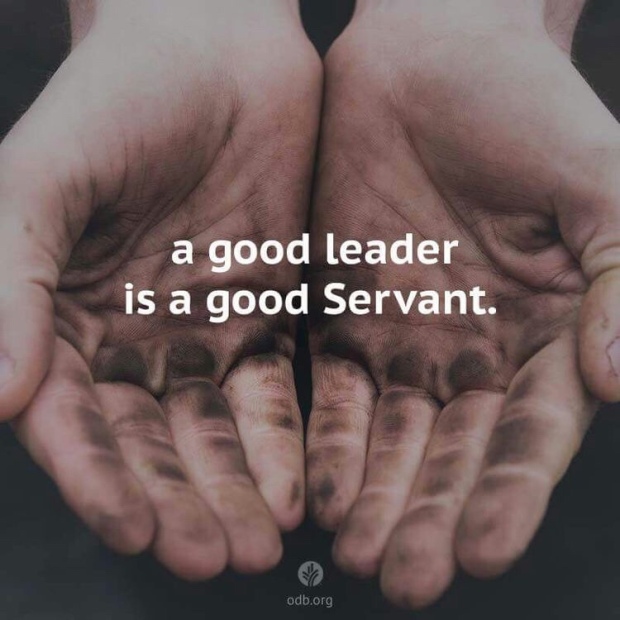 Morning Devotion: Leader means servant in God’s eyes, not dictator or boss. Dissecting the leadership model of Jesus and wrong teachings on submission. Submit=Be willing to yield to what honors God (possess humility), not obey or blindly obey people.

I am sometimes confused when people state they are the leader when their function is simply being served and telling others what to do. They are exalted and they have a hierarchy system so their needs, desires, wishes are served or met. Or they define great leadership by the number of people following them; Hitler had lots of followers under his demonic leadership it did not mean God thought he was a great leader.

I have had men tell me and women too that the husband is the leader in the family yet the wife does 80-90% of the serving, helping, loving, getting low in humility to empower her family. It is not the model Jesus laid out nor lived of leadership.

The one laying their life down, sacrificially loving, and serving is imitating Jesus and leading.

The disciples at one point became self important and argued over who would be the greatest among them. The desire to be great in the eyes of man is of the carnal nature (flesh).

Pride does not flow from God, it flows from Satan. Pride, self importance, was the principle sin of Lucifer. He wanted to be worshipped and exalted above God. Lucifer wanted to be served, not serve.

This was the response of Jesus to the arguing disciples:

Jesus, knowing their thoughts, called them to his side and said, “Kings and those with great authority in this world rule oppressively over their subjects, like tyrants. But this is not your calling. You will lead by a completely different model. The greatest one among you will live as the one who is called to serve others, because the greatest honor and authority is reserved for the one with the heart of a servant. For even the Son of Man did not come expecting to be served by everyone, but to serve everyone, and to give his life in exchange for the salvation of many,”~Matthew 20:25-28.

Jesus was and is perfect-He is the model for all things Christian. He selected disciples who were not yet enlightened. He walked with them, talked with them, served them, and empowered them to do what they saw Him doing. Great leadership is empowering others to reach their highest potential. Jesus did not show up and say, “Now look here peasants, God created you for Me so let’s get this straight, when I say jump, you say how high. These are my demands, meet them daily or else.”

Jesus had no pride, ego, or what they call male ego. Knowing He was worthy of worship, He got low and served others.

Phillipians tells us the following about following the example of Jesus:

Be free from pride-filled opinions, for they will only harm your cherished unity. Don’t allow self-promotion to hide in your hearts, but in authentic humility put others first and view others as more important than yourselves. Abandon every display of selfishness. Possess a greater concern for what matters to others instead of your own interests. And consider the example that Jesus, the Anointed One, has set before us. Let his mindset become your motivation.

The Example of Jesus Christ

He existed in the form of God, yet he gave no thought to seizing equality with God as his supreme prize. Instead he emptied himself of his outward glory by reducing himself to the form of a lowly servant. He became human! He humbled himself and became vulnerable, choosing to be revealed as a man and was obedient. He was a perfect example, even in his death—a criminal’s death by crucifixion!~Phillipians 2:3-8.

Love is destroyed by pride. Love and pride cannot occupy the same spaces. One will dominate and overpower the other. God commissions and empowers us to love. So when someone says, “I am called to lead you,” if they are following Jesus this means, “I am called to serve you, not seek to be served by you.”

I have met numerous “leaders” and men in my day who told me they were called to lead me. Yet what that meant was they felt empowered to tell me what to do and wanted to be served. This is NOT godly leadership at all, it’s worldly leadership.

I have had single men tell me all the ways I could benefit their lives because to them a wife is servant to meet their needs. They could have cared less about loving me, treating me the way Jesus would. My dreams, calling from God, desires were completely insignificant. They saw someone unmarried and pretty (their words not mine) they wanted to purchase (flash their money, paycheck at) to serve them.

Women are not objects or slaves to be purchased to serve the whims of men then be replaced when she fails to meet a need, cheated on when she cannot meet his pleasures, or used for her body. God did NOT create a system of selfishness nor objectification. God created a family that is supposed to be fueled by love. God says, “Husbands forsake all others and cleave to your one wife. Love her the way Jesus loves the church. He was willing to die for the church. Jesus got low and served. Jesus empowers and leads by love and example. Jesus walks in purity not lust. Jesus cares about every single detail…follow My Son Jesus. Be an imitator of Him.”

The verse that says wives be subject to your husbands as unto the Lord in the original text means be wholly devoted in love-this means she is monogymous and not enganged with other lovers, she has eyes for her husband, single vision. It does NOT mean he becomes her god and she must obey him.

Husband is not the same as God. If it were so, then God is the author of confusion because He plainly says, “You shall have no other god besides me,” and “You are a slave to whomever you obey.” If the texts about husbands and wives meant the husband has the final authority, if he told his wife to betray God she would have to obey her spouse over God. No! She will be held accountable to God for obeying God not man. God is the final authority.

In inner healing class we had a lady who’s husband was molesting his granddaughter. The wife was submitting to his perverted leadership and holding a pillow over the child’s head during the violation. Was she honoring her husband by submitting to his perversion? Was she a good wife? No! She was a bad wife. She will spend a long time in jail like him for harming this child. The lady who was molested over and over was a testimony of healing in the class, her grandparents were not in the class.

Part of intimate relationship is revealing the righteousness of God to those connected to us. Her role as his wife and sister in Christ was to point her husband to righteousness. We do not yield to what is ungodly. No no no no! Ephesians 5:21 tells all followers of Jesus to be willing to yield (submit, possess humility) in reverence for the Lord. Being willing to yield is NOT the same word as obey.

Culture focuses on the wife submitting while ignoring the verse before it that says men and women, all believers submit to each other and choose humility. Culture also ignores the verses that tell husbands to go even further than that to love their wives the way Jesus loves the church (die to selfishness, pride, ego, immorality). Point highlighted again, we are NOT to yield to what is ungodly and violates our relationship with God. Nor are we puppets to be led on strings by whims of others.

Those led by the Spirit of God are the children of God. If your boss at work, pastor, mentor, parent, spouse or anyone claiming authority over you tells you to do something wicked, say no. That is not rebellion, it is honoring God. Godly leaders point to what honors the Lord and people. God will not lead anyone into sin, nor is God a slave driver who does not care about the needs, desires, or dreams of those He leads.

May we lead like Jesus which is counter cultural to this world. The greatest in the Kingdom of God has a heart of a servant, it is one who loves and looks out for the best interests of others.

Papa God help us to see leadership through the lenses of Jesus. You gave us a perfect model in your Son. Jesus was not a bully, dictator, abuser, nor did He use His status to Lord over people. He got low and served. He took the lowest place and you exalted Him to the highest place. Jesus is perfect theology. Jesus is the perfect spouse model. Jesus is the perfect leader; He seeks to look out for the best interests of those connected to Him. Jesus perfectly loves. Jesus does not use people He partners with them. Jesus, beautiful Jesus. May we abide in Jesus and lead like Jesus. In Your powerful name, amen.